Small-cap stocks, however, extended recent strength. This may be indicating that investors are betting on improved economic conditions in the near term as vaccine distribution accelerates across major economies, with the Russell 2000 index closing 1.77% higher. The improved market optimism is also reflected in the bond markets, evidenced by the 2-year/10-year yield curve steepening to fresh multi-year highs, before moderating into the close as long-dated US government bond yields eased.

Markets are keying in on measures in the U.S. Congress aimed at responding to President Donald Trump’s alleged involvement in inciting last week’s riots. The House is slated to begin debate on impeachment articles Wednesday, a move that is gaining support among Republican lawmakers. A trial in the Senate could possibly last beyond Trump’s term in office, set to expire January 20 when President-elect Joe Biden will be sworn in as president. 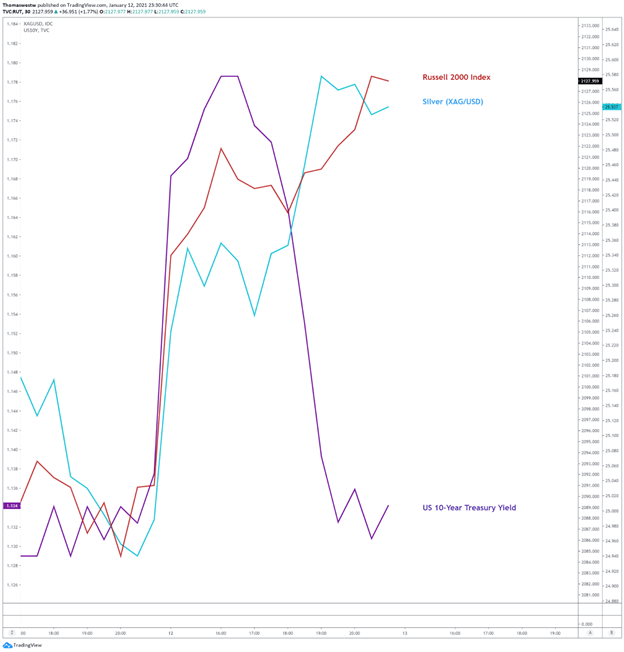 Traders largely shrugged off worsening Covid situations across several major APAC economies after Malaysia’s King declared a state of emergency until August in an effort to control the spreading virus. The announcement pulled regional markets down, but most of the damage was contained to Malaysian markets.

Silver is climbing after the US Dollar’s recent multi-day rally fueled declines for the metal, with XAG/USD dropping over 10% until prices caught a bid early Tuesday. The decline from last week’s multi-month high saw gold prices suffer the same fate, also induced by the strong Greenback. USD strength was likely bolstered by short covering in the market, as some traders abandoned a bearish outlook for the currency following the pair of US Senate runoff elections.

XAG/USD is back above the 25.5 handle after dropping as low as 24.35 on Monday. The 38.2% Fibonacci retracement at 24.797 from the August-September move appeared to provide a layer of support after slicing below its 9-day Exponential Moving Average. The 50-day Simple Moving Average also aligned with the Fib retracement and may help support higher lows ahead.

Prices are approaching the 50% pseudo-Fibonacci level, where November’s rally stalled out last year and may serve as an area of resistance once again. The aforementioned 38.2% Fib level would be a level for bulls to defend on the next downswing. The 9-day EMA is quickly approaching prices as it moves lower, which could sap momentum. For now, prices may need to consolidate before another significant move higher. 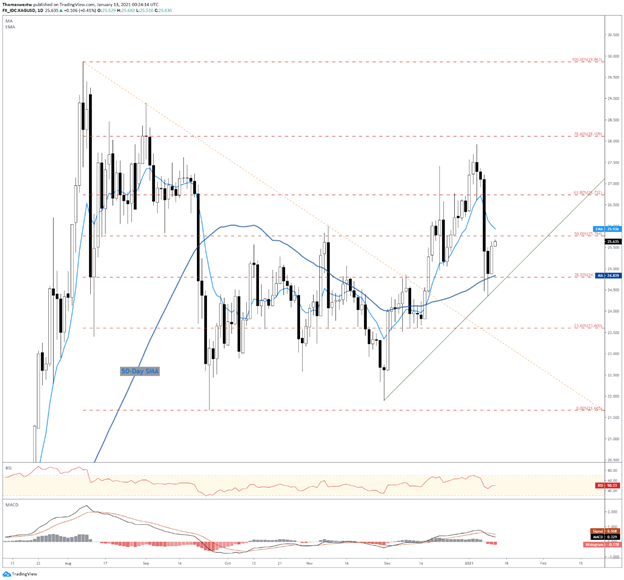