The Canadian Dollar has had a mixed January, in part thanks to the resurgent (so to speak) US Dollar. The first Bank of Canada rate decision of 2021 brought into new light policymakers’ frustration, with Governor Tiff Macklem saying that “we’ve seen this broad-based US dollar deprecation that doesn’t reflect some positive development in Canada that the exchange rate is absorbing…the exchange rate is starting to create a material headwind for the Canadian economy.”

Unfortunately for the BOC, as Governor Macklem noted, when “in a situation where our Canada-U.S. exchange rate is moving largely because of made-in-U.S. developments as opposed to made-in-Canada developments,” it means that the BOC can do very little to prevent global macroeconomic forces (or rather, the Federal Reserve) from pushing traders out of low yielding safe havens like the Japanese Yen and US Dollar and into growth-sensitive currencies like the Canadian Dollar. 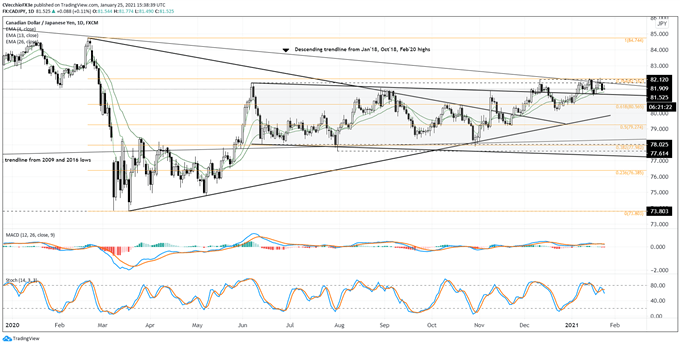 CAD/JPY rates have recently tested parallel channel resistance in the 81.58/91 area, but failed for the fifth such since June 2020 that this zone has rejected a bullish advance. But the more times resistance (or support) is tested, the more likely it is to break as supply on the other side of the trade is exhausted. CAD/JPY rates continue to hold near resistance in the form of the descending trendline from the January 2018, October 2018, and February 2020 highs, as well as the 76.4% Fibonacci retracement of the 2020 high/low range at 82.16.

CAD/JPY rates are intermingled among their daily 5-, 8-, 13-, and 21-EMA envelope, which is in neither bearish nor bullish sequential order. Daily MACD is starting to decline while above its signal line, while daily Slow Stochastics are trending lower out of overbought territory. More patience is still required as bulls may get another attempt at a breakout attempt to the topside in the coming sessions. 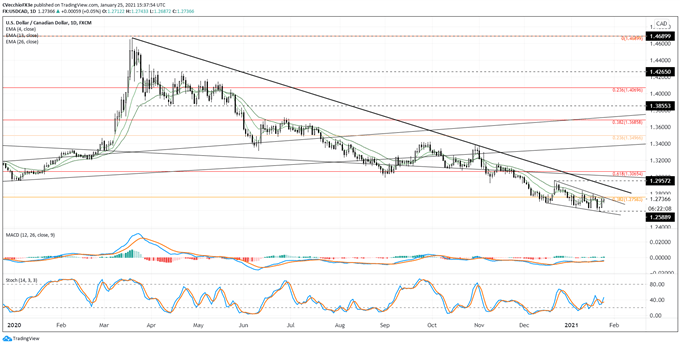 USD/CAD rates hit another fresh yearly low last week, setting new lows each week of 2021. But the sharp bounce higher on Friday setup a potential morning star candle cluster, a bullish bottoming pattern. In context of price action since mid-December 2020, it appears that USD/CAD rates may be consolidating within the confines of a bullish falling wedge, which would call for a return to as high as 1.2957. In doing so, USD/CAD rates would break the downtrend from the March and October 2020 highs, a feat that would suggest USD/CAD’s longer-term double top may not be valid. Before getting ahead of ourselves, said descending trendline comes into play near 1.2800 through the rest of January. 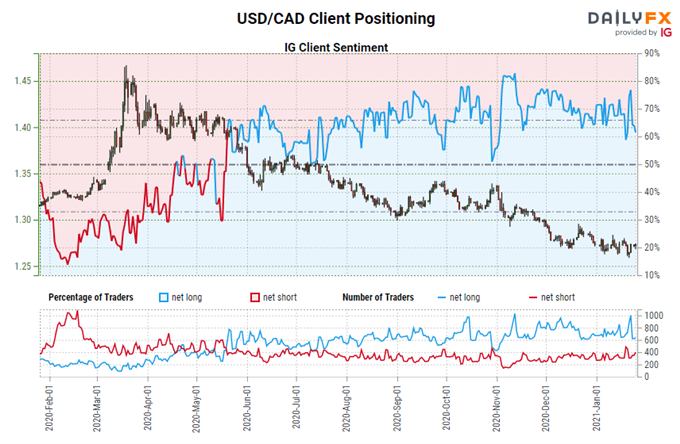 We typically take a contrarian view to crowd sentiment, and the fact traders are net-long suggests USD/CAD prices may continue to fall.

Yet traders are less net-long than yesterday and compared with last week. Recent changes in sentiment warn that the current USD/CAD price trend may soon reverse higher despite the fact traders remain net-long.