Wall Street trading saw U.S. indices move higher on Tuesday ahead of Georgia’s Senate runoff elections that will decide control of the U.S. Congress. The tech-heavy Nasdaq Composite led the charge higher, with a gain of 0.95%. The S&P 500 and Dow Jones Industrial Average also moved higher, but the small-cap Russell 2000 recorded a 0.37% fall.

That said, the pandemic continues to rage on across the U.S., with the 7-day average daily case count at 211k, according to the Covid Tracking Project. Many stateshave recently tightened social distancing measures, including California where the U.S. Army Corps of Engineers has been deployed to help supplement a critical shortage of oxygen. Europe is also seeing another set of new restrictions go into effect after a new variant of Covid-19 appearing late last year. 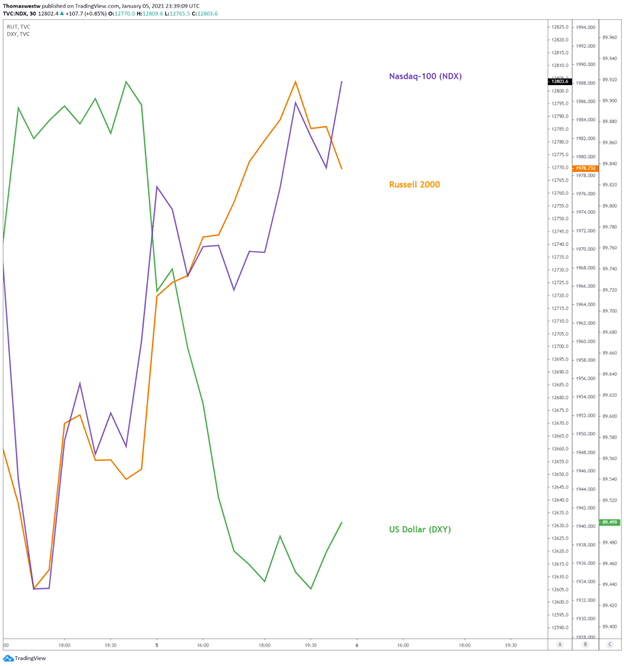 The aforementioned U.S. Senate runoffs and Caixin Chinese PMIs will likely set the tone for Wednesday’s Asia-Pacific trading session. Earlier data this week showed official Chinese manufacturing activity continued to grow in December, although at a slower pace. Tonight’s data will reveal how the nation’s private services industry performed last month. A print above the 50 level will mark the 8th consecutive month of growth, and may help spur some Yuan strength.

Turning back to the U.S. elections, investors will be closely watching the results, with the future of fiscal policy size likely in the balance. A democratic victory would see candidates Jon Ossoff and Raphael Warnock greatly boost the odds for more robust Covid aid packages later this year, with President-elect Biden’s White House expected to favor state and local aid, as well as increased direct payments to Americans.

The Australian Dollar is off to a stellar start this year, bolstered by surging iron ore prices. A recent push lower in the US Dollar has been particularly beneficial, with AUD/USD gaining 1.26% on Tuesday. The move higher may extend further, but with prices currently trading above its Bollinger Band upper resistance, a short-term pullback to the 20-day exponential moving average (EMA) would be unsurprising.

Still, given recent strength, an extension higher from the current levels is within the realm of possibility. A break lower, however, would see the aforementioned EMA serve as support, but a break below would hardly threaten the longer-term move. The December 2019 trendline would likely come into play as support on a move lower. 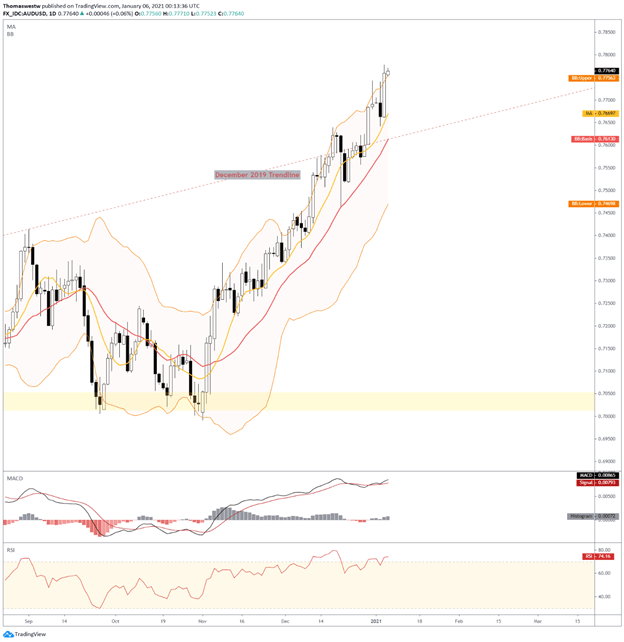