Get Your Free USD Forecast

A risk-off tone prevailed in Asia-Pacific trading hours. The defensively-minded US Dollar and Japanese Yen rose while their sentiment-geared Australian and New Zealand Dollars fell alongside stocks and cyclical commodities including copper and crude oil.

Gold prices idled as the downbeat backdrop weighed on bond yields – which is typically supportive for non-interest-bearing bullion – even as the Greenback climbed. That made for conflicting catalysts for the anti-fiat metal, leaving it to mark time in familiar territory below the $1900/oz figure.

A surprise move by the People’s Bank of China to drain CNY78 billion (USD12 billion) from the banking system via open market operations probably contributed to the downbeat mood. PBOC advisor Ma Jun cited the risk of fomenting asset bubbles as the impetus behind the action.

A possible delay of US President Joe Biden’s USD1.9 trillion stimulus plan may have helped. Senate Majority Leader Schumer said the effort may not be delivered until mid-March. Meanwhile, Biden said he is open to negotiating the size of the packagewith Republicans, which may see it shrink. 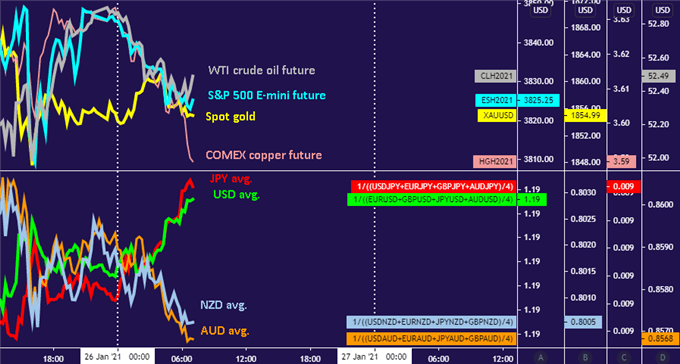 Looking ahead, the IMF will release an update of its World Economic Outlook. It may bring a downgrade of global growth forecasts, echoing a slowdown in activity over recent months as the world struggles to contain the Covid-19 pandemic. Indeed, backsliding into lockdowns has plagued most major economies.

That may amplify the risk-off tilt, especially given a backdrop of cooling confidence in near-term fiscal stimulus prospects. Worries that the Fed might signal unease with the recent rise in inflation expectations – capping scope for more monetary support – may hurt as well. S&P 500 futures point telling lower.

The Conference Board’s gauge of US consumer confidence headlines the data docket. Sentiment is expected to hold broadly unchanged in January after falling in the prior two months. However, a recent downshift in US data outcomes relative to baseline expectations may set the stage for disappointment.