Risk appetite continued to fade during Asia-Pacific trade on the back of tightening liquidity conditions in China, and a surge in overall volatility. Australia’s ASX 200 index slipped 0.64% while Japan’s Nikkei 225 plunged 1.89%, as the nation’s job availability ratio registered its largest drop since 1975.

In FX markets, the cyclically-sensitive AUD, NOK and CAD lost ground against their major counterparts, while the haven-associated US Dollar largely outperformed. Gold prices nudged marginally higher while silver drifter lower, as yields on US 10-year Treasuries held steady at 1.05%.

Looking ahead, German unemployment and GDP data headline the economic docket alongside the US PCE figures for the month of December.

As expected, the relentless surge of coronavirus infections in Canada has notably weighed on the local currency in recent days, as the nation endures the imposition of the most stringent restrictions since March. A wave of risk aversion has also undermined the cyclically-sensitive currency, as investors seek the safety of the haven-associated US Dollar in the wake of the largest single day drop on Wall Street since October.

However, this may prove to be a short-term dynamic given the substantial decline in daily Covid-19 cases seen in the last two weeks. The 7-day moving average tracking infections has fallen by just under 50% since peaking on January 9 at 8,885.

Moreover, surprisingly hawkish commentary out of the Bank of Canada could underpin the Canadian Dollar, with the central bank hinting at the possibility of pulling back on some of its supportive measures as the local economy continues to recover.

Governor Tiff Macklem stated after the BoC’s recent monetary policy meeting that “if the economy and inflation play out broadly in line or stronger than we projected, then the amount of quantitative easing (QE) stimulus needed will diminish over time”. 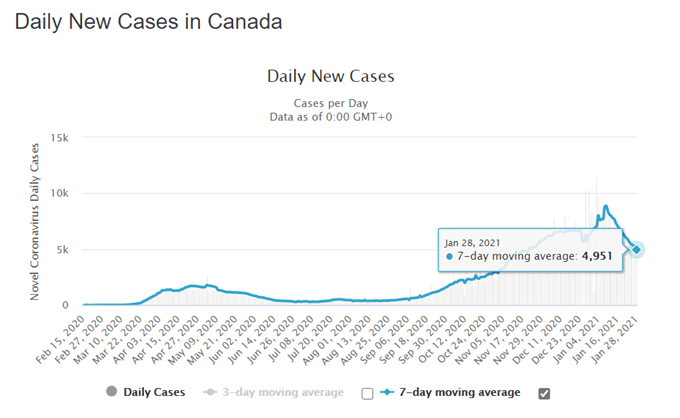 These comments come as no surprise given that Macklem has previously commented that “as much as bold policy response is needed, it will inevitably make the economy and financial system more vulnerable to economic shocks down the road”.

That being said, the Governor also reiterated that “if the economy turns out to be substantially weaker than we are projecting – leading to more disinflationary pressure – then we have options to add even more stimulus [and] we are prepared to use these options as needed”.

With that in mind, investors should continue to monitor local health developments to determine the longer-term trajectory of the Canadian Dollar. A continued decline in Covid-19 cases likely diminishes the probability of further easing from the BoC and in turn limits the potential downside for CAD against its major counterparts. 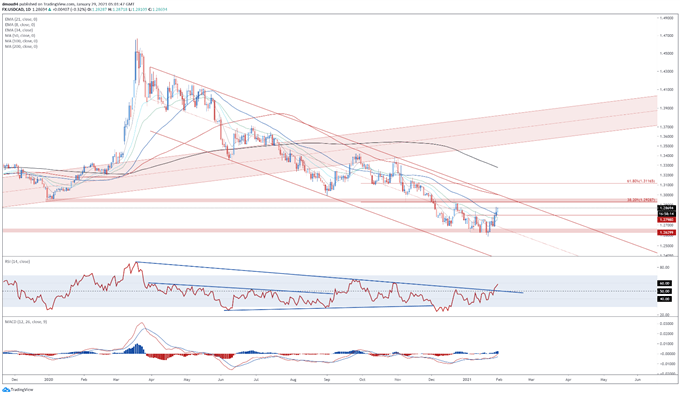 The USD/CAD exchange rate seems poised to extend its recent rebound higher, as price bursts above the trend-defining 50-day moving average (1.2808) and the January 4 high (1.2798).

With the RSI snapping the downtrend extending from the March 2020 extremes, and the MACD indicator climbing to its highest levels since November, further gains appear in the offing.

Breaching psychological resistance at 1.2900 would probably generate a push to challenge range support at 1.2930 – 1.2960. Clearing that likely brings the 100-DMA (1.3003) and Descending Channel resistance into the crosshairs.

However, if 1.2900 remains intact, a pullback towards former support-turned-resistance at the January 4 high (1.2798) could be on the cards. Piercing that likely neutralizes near-term buying pressure and paves the way for the exchange rate to retest the yearly low (1.2589). 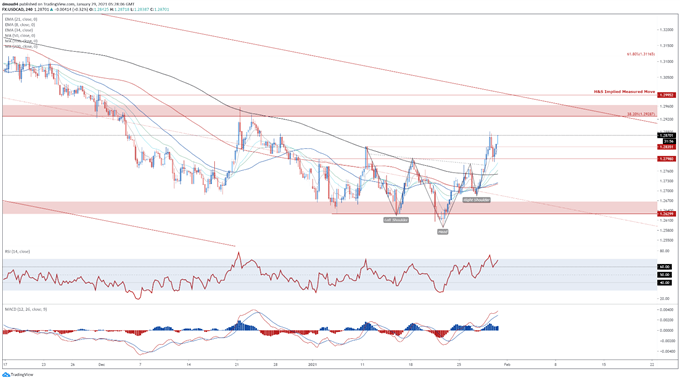 Zooming into a four-hour chart reinforces the bullish outlook depicted on the daily timeframe, as prices accelerate away from the neckline of an inverse Head and Shoulders reversal pattern.

A convincing push above 1.2880 would likely carve a path for buyers to probe the 38.2% Fibonacci (1.2929). The pattern’s implied measured move suggesting that USD/CAD could climb an additional 1% from current levels to challenge the psychologically imposing 1.3000. 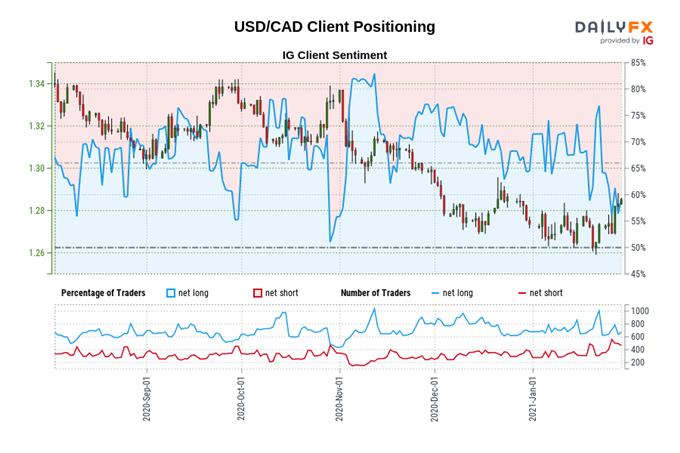 We typically take a contrarian view to crowd sentiment, and the fact traders are net-long suggests USD/CAD prices may continue to fall.

Positioning is more net-long than yesterday but less net-long from last week. The combination of current sentiment and recent changes gives us a further mixed USD/CAD trading bias.