China’s CSI 300 index slipped 0.54% as authorities ordered the lockdown of Shijiazhuang, a city located just outside the capital of Beijing, in response to an outbreak of the novel coronavirus.

In FX markets, the cyclically-sensitive AUD and NZD largely outperformed, while the haven-associated USD, JPY and CHF lost ground against their major counterparts.

Gold and silver prices fell as yields on US 10-year Treasuries continue to push higher, climbing to 1.1% for the first time since March last year. Looking ahead, the US non-farm payrolls report for December headlines the economic docket alongside unemployment figures out of the Euro-zone. 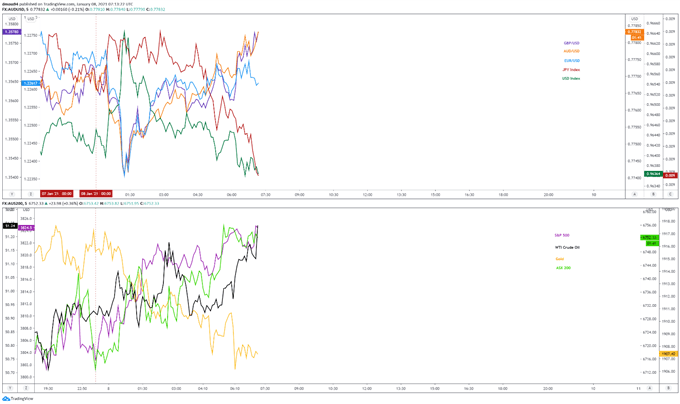 US benchmark equity indices have stormed higher in recent days, buoyed by the prospect of more extensive fiscal stimulus in the wake of the Democrats taking control of the Senate, House and presidency.

The victories by Democratic challengers Jon Ossoff and Raphael Warnock in the two run-off elections in Georgia creates a scenario in which both sides of the aisle will have 50 votes in the Senate, with Vice President-elect Kamala Harris ultimately casting the tie-breaking votes.

This paves the wave for the newly certified President-elect Biden to deliver on a proposed fiscal support package that includes the provision of $2,000 stimulus checks, increased funding for state and local aid, and additional investment for the distribution of coronavirus vaccines.

Of course, with a super majority required to bypass a filibuster – 60 votes needed in support instead of 51 – there is a distinct possibility that this package will struggle to pass. However, with several Republicans publicly signally their support for increased stimulus payments, it seems relatively unlikely that the Senate will shoot down the President-elect’s proposal.

Moreover, the vehement opposition from Senate Republicans to reverse the Trump tax cuts may also serve as a tailwind for regional asset prices, given the fairly slim likelihood that 60 Senators will vote in support of increasing the current levels of corporate taxation.

Therefore, the prospect of additional fiscal aid, in tandem with the slim chance of an increase in taxation, may underpin the benchmark S&P 500 index in the near term.

That being said, the upcoming non-farm payrolls (NFP) report for December could take some wind out the S&P 500’s sails, given the unexpected decline seen in the number of people employed by private businesses.

December’s ADP employment release signalled the first decline in private-sector employment since April, with 123,000 employees losing their jobs. This suggests that the upcoming NFP release could drastically undershoot expectations, given the consensus estimate for the ADP figures was an increase of 88,000.

The US economy is expected to have added 71,000 jobs last month, down from a 245,000 increase seen in November 2020. With that in mind, disappointing figures may dampen market sentiment and cap the benchmark S&P 500’s recent topside surge.

From a technical perspective, the S&P 500 looks set to extended its recent climb to fresh record highs, as prices clamber above psychological resistance at 3800.

Bullish moving average stacking, combined with the RSI eyeing a push into overbought territory, suggests the path of least resistance is higher.

A push to test the 100% Fibonacci (3860) seems likely if psychological support at 3800 remains intact. Clearing that probably opens the door for buyers to probe the 4000 mark.

Conversely, sliding back below the January 7 close (3795) could ignite a pullback to confluent support at the 2020 high (3748) and 8-day exponential moving average.

Breaking below that may open the door for sellers to drive the index back to the uptrend extending from the March 2020 nadir and the November high (3668). Traders are further net-short than yesterday and last week, and the combination of current sentiment and recent changes gives us a stronger S&P 500-bullish contrarian trading bias. 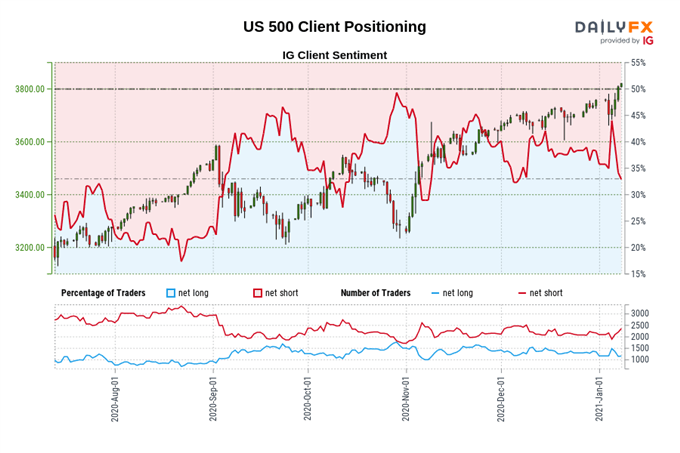