Wall Street traders pushed the Dow Jones, S&P 500, and Nasdaq Composite to fresh record highs on Monday following the extended U.S. holiday weekend. The risk-on mood was prompted by U.S. President Donald Trump’s signing of a $2.3 trillion government spending package which included $900 billion in Covid relief funds. This follows initial hesitation after asking Congress to amend the bill. The small-cap Russell 2000 was the only laggard, dropping 0.38%.

The push for checks to be increased to $2,000 from $600 passed in a House vote late Monday. Now, the measure heads to the Senate where the bill’s fate is uncertain with many GOP lawmakers expressing worry over increasing government debt further amid the pandemic. The U.S. House of Representatives also secured enough votes to override Trump’s recent veto of the U.S. military spending budget, although the outcome is less likely to affect markets than the stimulus measure. 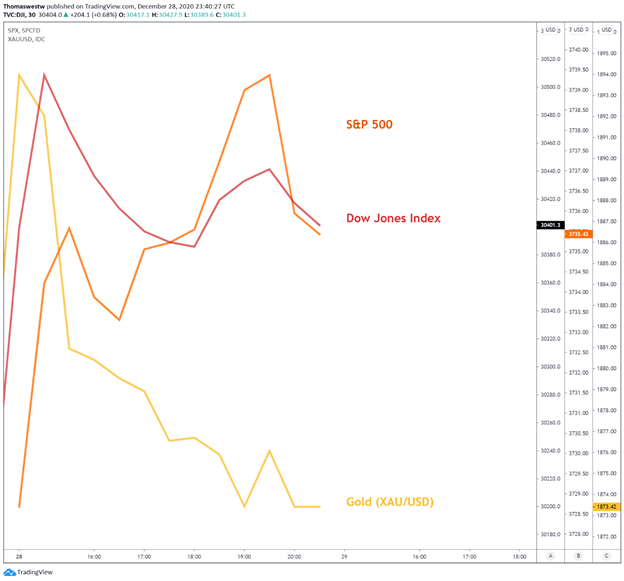 Wall Street’s upbeat sentiment is likely to carry over into the Asia Pacific session. A light economic calendar leaves risk appetite subject to the prevailing mood and American political headlines. The recent Brexit and vaccine developments are also likely continuing to underpin sentiment.

The fate of the upcoming U.S. Senate vote is uncertain, but sentiment is likely to be boosted further if passed, with President Trump already in support of increased payments. Nevertheless, Tuesday’s session will likely see light volumes regardless, with many traders out ahead of the New Year’s holiday. While this leaves many traders off the desk this week, the possibility for market moving events to manifest remains. After this week, traders may begin to eye any holiday related upticks in Covid cases across major economies.

Meanwhile, the Australian Dollar is benefiting from the boost in sentiment as it makes gains against most of its major peers. AUD/NZD is finding support against its 38.2% Fib retracement from the Aug-Dec move. Still, steep rejections from intraday highs over the past week may be signaling some short-term exhaustion in bulls.

The 200-day Simple Moving Average (SMA) also appears to be exerting some pressure at current levels. Earlier this month, the 50- and 200-Day SMAs formed a bearish Death Cross that may be dragging on the pairs sentiment still. The upside will look for a breach above the 200-day SMA, and to the downside, a break below the 38.2% Fib. 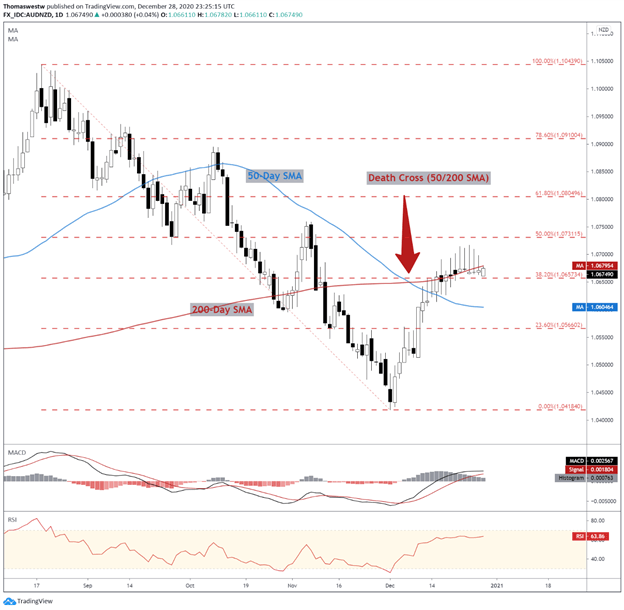 AUD/JPY is trading lower after setting a fresh yearly high on Monday. The overall direction appears poised for further upside, however, with the 50- and 200-day SMAs aiming firmly to the upside. A short-term pullback may manifest before breaking into new highs though, with the MACD recently breaking under the signal line, and RSI remaining in neutral territory. 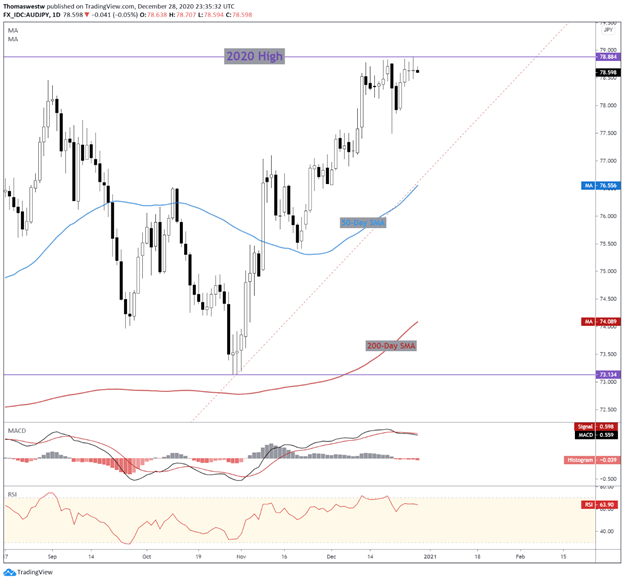