Get Your Free Equities Forecast

In FX markets, the cyclically-sensitive AUD, NZD and NOK largely outperformed, while the haven-associated USD and JPY lost ground. Gold and silver prices dipped lower as yields on US 10-year Treasuries surged above 1% for the first time since March 2020.

Looking ahead, a flurry of PMI figures out of Europe headline the economic docket alongside the minutes from the Federal Open Market Committee’s monetary policy meeting in December. 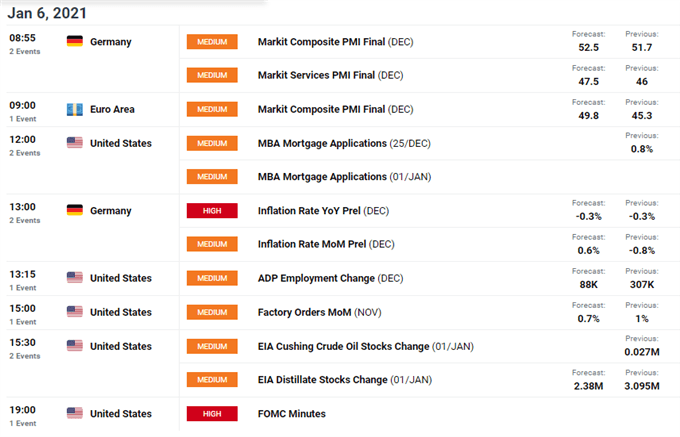 The growing likelihood of a Democratic sweep in the two Senate run-off elections in Georgia sent the tech-heavy Nasdaq 100 tumbling lower, as investors mulled the potential implementation of tighter regulatory controls and corporate tax hikes under an unchecked Biden administration.

At the time of writing, Democratic challenger Raphael Warnock looks set to defeat incumbent Kelly Loeffler, while her Republican counterpart David Perdue is locked in a tight battle with Jon Ossoff. However, with the outstanding ballots coming from Democratic strongholds, there is a strong possibility that Ossoff will ultimately overcome Perdue.

Indeed, the New York Times Election Needles suggest that Messrs Warnock and Ossoff will prevail in their respective races. This scenario would result in the Senate being split 50:50 between both sides of the aisle, with Vice President-elect Kamala Harris casting the tie-breaking votes.

Biden has hinted at raising the current level of corporate taxation from 21% to 28% and has also been a staunch critic of Section 230 of the Communications Decency Act of 1996 – a law that shields social media companies from being liable for what their users post.

Therefore, it’s hardly surprising that the Nasdaq 100 has slipped lower given the recent developments. That being said, the ability of Senate Republicans to filibuster the Biden administration’s agenda could prevent these legislative proposals from being adopted.

Nevertheless, the possibility of regulatory change and tax hikes may undermine the price of technology companies in the near term, if Democrats successfully take control of the Senate.

From a technical perspective, the tech-heavy Nasdaq 100 index could be at risk of further losses, as confluent support at the uptrend extending from the March 2020 low and psychologically imposing 12600 level comes under pressure.

With the RSI plunging back below 60 and a bearish crossover taking place on the MACD indicator, the path of least resistance – at least in the near term – seems skewed to the downside.

A daily close below the January 4 low (12959) is probably required to validate the break of uptrend support and trigger a push to test range support at 12100 -12150. Clearing that probably opens the door for sellers to drive prices back towards the November 10 low (11503).

That being said, bullish MA stacking suggests that an extended downside push is relatively unlikely. Therefore, a retest of the yearly high is hardly out of the question, if uptrend support remains intact.

Hurdling that likely signals the resumption of the primary uptrend and brings the 13200 level into focus. 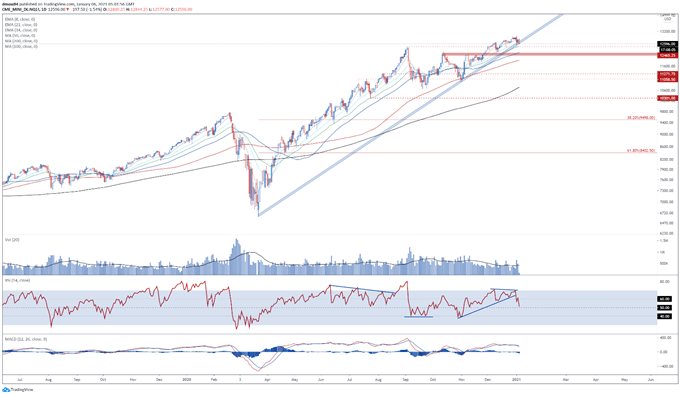