In FX markets, the cyclically-sensitive AUD, NZD and NOK largely outperformed, while the haven-associated USD, JPY and CHF lost ground against their major counterparts. Silver surged over 7% on the back of a Reddit-inspired buying spree and gold rose just under 1%. Looking ahead, Euro-area unemployment data for December headlines the economic docket alongside manufacturing PMI figures out of the US.

The Euro may regain lost ground against the US Dollar in the coming weeks, as better-than-expected economic data suggests that the impact of a second wave of the novel coronavirus wasn’t as detrimental as the first one endured in March.

Fourth quarter GDP prints out of France, Germany and Spain suggest that the trading bloc’s economy may have weathered the storm better than originally forecast. Preliminary figures showed that the Spanish economy grew by 0.4% (est -1.5%), while the German and French economies contracted less than consensus estimates projected.

A surprising jump in consumer price growth in Germany could also underpin the Euro against its major counterparts, with the nation’s inflation rate climbing to 1% in January (est. 0.7%). However, European Central Bank executive board member Isabel Schnabel warned that this unexpected jump in inflation is a short-term anomaly and “shouldn’t be mistaken for a sustained increase in inflation”.

Moreover, several ECB Governing Council members have stated that the central bank is ready to use all of its tools in order to stimulate consumer price growth, and have even flagged the possibility of cutting interest rates further into negative territory.

Governing Council member Klaas Knot stated that “there is still room to cut rates, but of course that would also have to be seen in conjunction to our overall monetary stance”, while his colleague Olli Rehn reiterated the central bank’s commitment to “use and adjust all our instruments as appropriate”.

That being said, with the Euro-zone’s core inflation rate expected to climb to 0.9% (prev. 0.2%) and headline inflation forecast to rise to 0.5% (prev. -0.3%) in January, the possibility of additional monetary easing seems relatively unlikely.

Therefore, a less-than-expected contraction in Euro-area GDP, in tandem with a surprising jump in inflation, could diminish the possibility of further easing from the ECB and in turn buoy the Euro in the near term.

The technical outlook for EUR/USD rates appears relatively mixed, as price carves out a possible Head and Shoulders reversal pattern above a key inflection range at 1.2055 – 1.2075.

Remaining constructively positioned above 1.2050 could open the door for buyers to continue driving the exchange rate higher, with a break above the 21-day exponential moving average (1.2147) probably carving a path to challenge the yearly high (1.2349).

However, a daily close below the January 18 low (1.2053) would likely validate the bearish reversal pattern and intensify near-term selling pressure. The Head and Shoulders implied measured move suggesting that price could fall as much as 3% from current levels to probe psychological support at 1.1800. 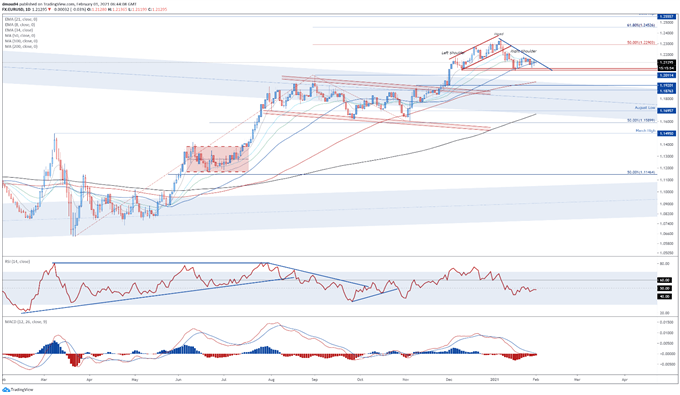 We typically take a contrarian view to crowd sentiment, and the fact traders are net-short suggests EUR/USD prices may continue to rise.

Positioning is less net-short than yesterday but more net-short from last week. The combination of current sentiment and recent changes gives us a further mixed EUR/USD trading bias. 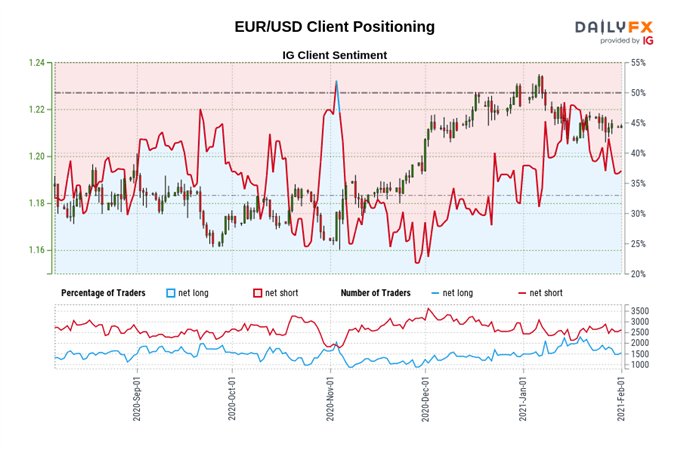