US equity markets came booming back on Monday as traders kicked off February on a risk-on note following steep losses across major indexes last week. The tech-heavy Nasdaq Composite rose an impressive 2.55%, the best performance among the major US indexes. The small-cap Russell 2000 index closed 2.53% higher, while the S&P 500 and Dow Jones Industrial Average climbed 1.61% and 0.76%, respectively.

A sinking Euro pushed the US Dollar higher after a worse-than-expected German retail sales figure crossed the wires. The report highlighted the Covid-induced economic impact from increased lockdowns back in mid-December. Germany is facing criticism over its ability to secure a sufficient supply of vaccinations, with the government reportedly considering Chinese and Russian vaccines to complement distribution goals. EUR/USD ticked down 0.64% through Monday trade, while the DXY index climbed above the 91 handle.

Meanwhile, silver prices rose to the highest level in nearly a decade as the precious metal moved into the speculative sights of the now famous Reddit group WallStreetBets, the same online trading forum that helped send shares of GameStop flying in January. The CME raised COMEX Silver Futures margins by 18% in response to the volatility. While the CME’s action isn’t out of the ordinary, it could temporarily reduce trading activity in these contracts, opening the door to elevated volatility conditions. 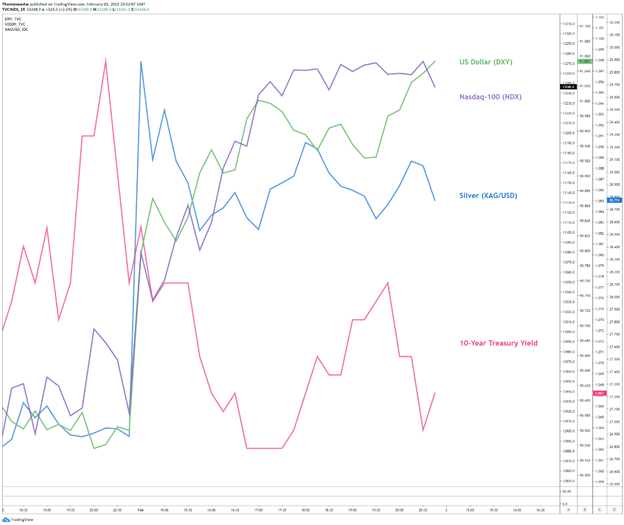 The risk-sensitive New Zealand Dollar failed to move higher alongside equity markets after giving up early gains. Kiwi traders will be keeping a close eye on the upcoming Q4 employment report set for release on Wednesday morning, with a 0% change expected according to the Finance Prop Economic Calendar. A worse-than-expected figure may bolster bets for the RBNZ to increase monetary support.

Today’s interest rate decision from the Reserve Bank of Australia will draw close attention from traders, although it is widely expected that the RBA will hold its benchmark interest rate at 0.10%. No changes are expected regarding to the amount of quantitative easing or yield curve control. The decision follows hawkish comments surrounding fiscal stimulus from Prime Minister Scott Morrison, who suggested a fiscally disciplined approach going forward as to not burden future taxpayers.

Following yesterday’s decline, the New Zealand Dollar is trading at its 50% pseudo-Fibonacci level against the Greenback. NZD/USD’s current level is in line with a zone of support that underpinned prices following last week’s sharp decline on Wednesday. Sideways price action may be the most likely short-term outcome, but weakness may prevail with the MACD oscillator aiming lower toward its zero line. 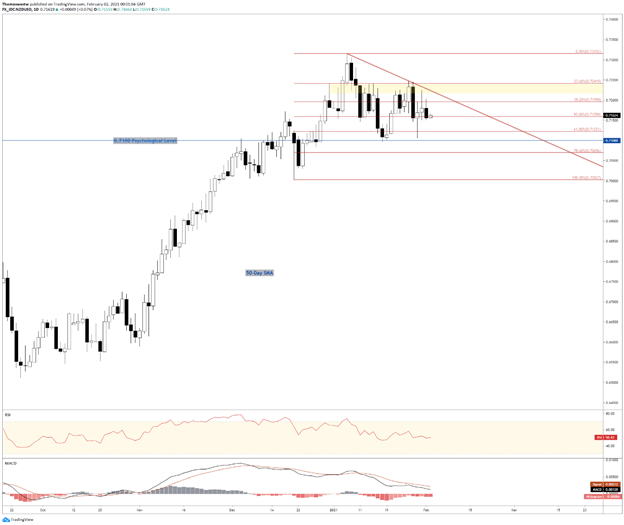