After traders on Reddit’s r/WallStreetBets fortuitously staked out a long position in GameStop, a worldwide guessing game of ‘what’s next’ began. Over the weekend, it became clear that the media is hyping silver prices. Not social media, mind you, but old fashioned financial media: the newspapers, the television stations, the radio shows.

Perhaps this is a coordinated distraction so retail traders give up on their long GME positions, and stop the ‘tail that wags the dog’ relationship in markets thanks to their aggressive OTM call buying (not too different than what Softbank was rumored to be doing last summer). Would it surprise anyone that powerful, wealthy individuals or companies would try and influence the masses through media?

Sprinkle in the recent fact that this past Friday saw some of the highest volume for the silver ETF, SLV, in its history, and there is clearly evidence of intense interest in the precious metal. High volumes and an ensuing rise in price are strong technical signals.But let’s relax for a moment. Recent mania, panics, and crashes aside…long silver has been and remains appealing.

Keeping an Eye on Long-term Fundamentals

On the fiscal side, rising government deficits and debts, coupled with prolonged low interest rates, on the monetary side, are curating an environment akin to the 2009 to 2011 period. As the global economy is looking ahead to a period of significant growth post-pandemic, silver prices have a recent historical precedent to suggest that they will benefit over the coming months, if not longer. Again, I will repeat as I have since last April, that long-term technical studies still suggest that a bottoming process is underway. 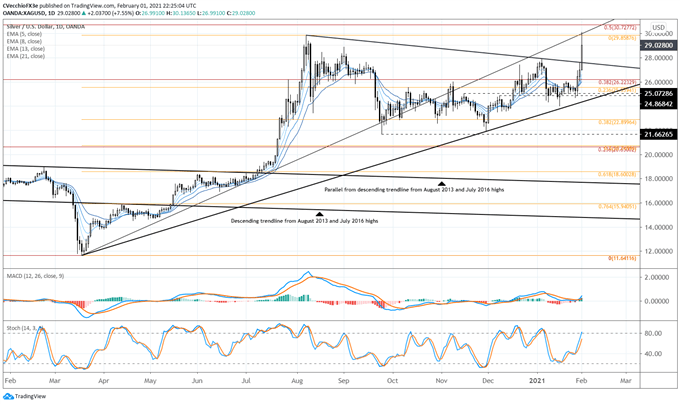 Silver prices have exploded higher from key Fibonacci retracements and have surged to their highest levels in eight years. Silver prices broke the 2020 high at 29.8588 on their way to the new 2021 high of 30.1365. It’s worth noting that silver prices found resistance at the backside of the original pandemic trendline from the March and July swing lows before turning lower on the session.

Silver prices are above their daily EMA envelope, which is in bullish sequential order. Daily MACD is trending higher above its signal line, and daily Slow Stochastics are racing towards overbought territory. The acceleration in bullish momentum contextualized by the symmetrical triangle breakout to new highs relative to 2020 suggests that the next leg up has begun. 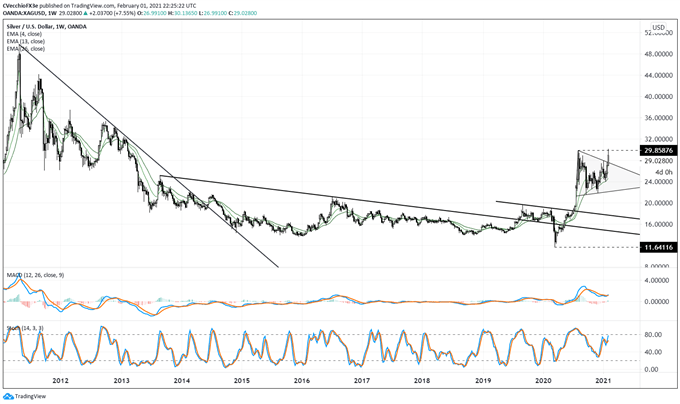 The long-term view on silver prices remains bullish. “The recent triangle consolidation is occurring in context of the breakout from the downtrend dating back to the August 2013 and July 2016 highs, suggesting that a long-term bottoming effort is still under way. If the silver price triangle were to breakout to the topside, there would be good reason to suspect that the move had meaningful technical tailwinds pushing prices higher.” The near-term bullish breakout in silver prices may be the start of the next leg higher in this multi-year bottoming effort. 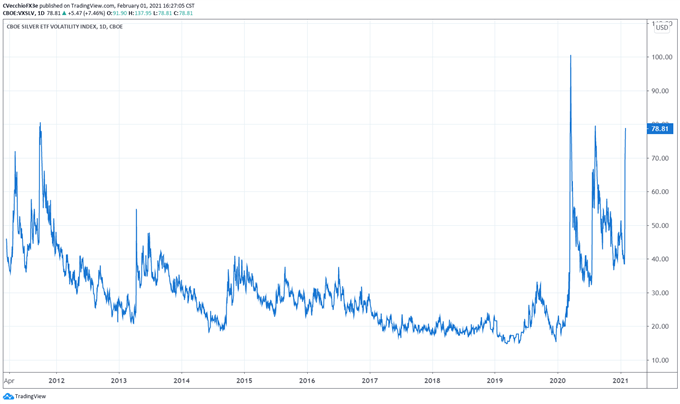 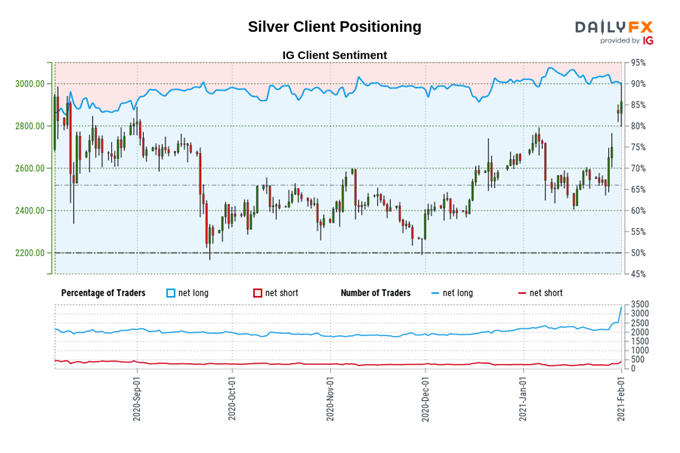 We typically take a contrarian view to crowd sentiment, and the fact traders are net-long suggests Silver prices may continue to fall.

Yet traders are less net-long than yesterday and compared with last week. Recent changes in sentiment warn that the current Silver price trend may soon reverse higher despite the fact traders remain net-long.