Equity markets climbed higher during Asia-Pacific trade, as investors mulled the prospect of further fiscal support out of the US and cheered the continued decline in global coronavirus cases. Australia’s ASX 200 rose 0.59% while Japan’s Nikkei 225 surged 2.12%, on reports that the government may ease coronavirus restrictions earlier than originally scheduled.

In FX markets, the US Dollar largely outperformed alongside the Australian and New Zealand Dollars, while the Japanese Yen and Swiss France lost ground against their major counterparts. Gold and silver prices crept higher despite yields on US 10-year Treasuries climbing to their highest levels since March of 2020.

Looking ahead, consumer confidence figures out of Mexico headline the economic docket alongside a speech from European Central Bank President Christine Lagarde.

The relatively weak pace of job growth in January may bolster calls for additional fiscal support and in turn underpin US equity markets in the near term. Friday’s non-farm payrolls report showed that the local economy added a paltry 49,000 jobs last month while the unemployment rate fell from 6.7% to 6.3%, driven in part by fewer people actively searching for employment.

Considering over 10 million Americans remain jobless due to the impact of the coronavirus pandemic, and almost 40% of those have been unemployed for over 6 months, its hardly surprising that the majority of lawmakers believe that further fiscal support is warranted.

However, Republicans have pushed back on President Biden’s $1.9 trillion stimulus proposal, given that the output gap in the fourth quarter of last year was a shortfall of $665 billion. GOP Senator Pat Toomey stated that “what you hear is these broad generalities about, well, people are suffering, so let’s spend another $2 trillion. It’s not the right solution”. 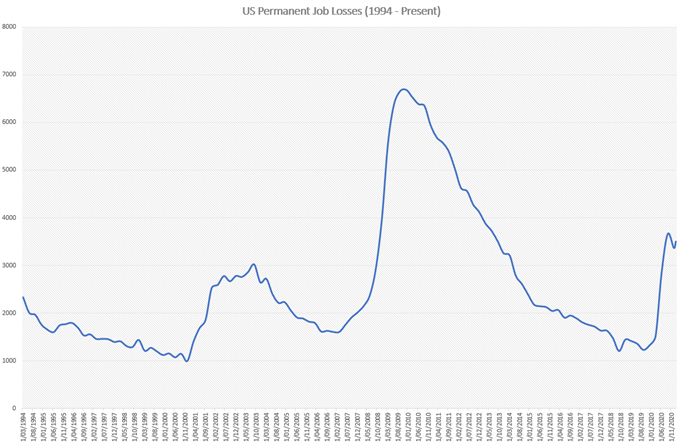 Nevertheless, with Democrats in both the House and the Senate filing joint budget resolutions, allowing Biden to pass the majority of his proposed package with a simple majority, it seems likely that supplementary aid will be provided in the near term.

Indeed, Treasury Secretary Janet Yellen has warned that without adequate support, it could take four years for the local labor market to recover to pre-pandemic levels. Therefore, the intensifying push for extra stimulus, in tandem with the notable decline in coronavirus cases and a marked increase in vaccination rates, may put a premium on the US benchmark Dow Jones Industrial Average and S&P 500 indices. 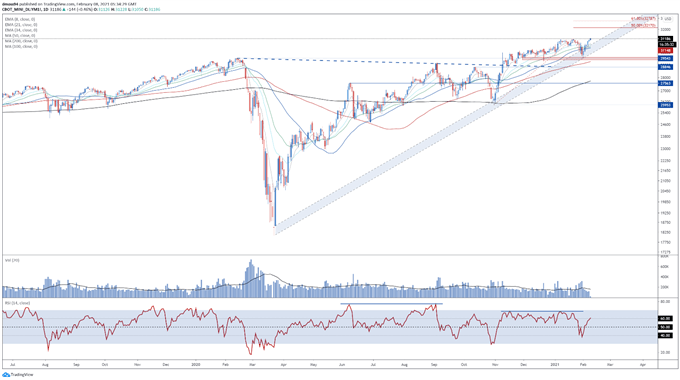 From a technical perspective, the Dow Jones Industrial Average (DJIA) looks set to extend its recent push higher, as price pushes past resistance at the January high (31188).

With price tracking above all 6 moving averages, and the RSI climbing back above 60, the path of least resistance seems higher.

A daily close above 31200 is likely required to signal the resumption of the primary uptrend and clear a path for price to challenge the psychologically imposing 32000 mark.

However, if 32000 holds firm, a short-term pullback towards the trend-defining 50-day moving average (30406) could be on the cards. 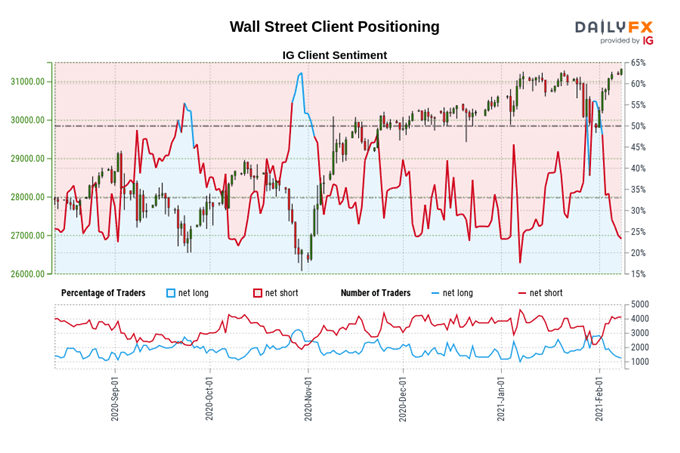 We typically take a contrarian view to crowd sentiment, and the fact traders are net-short suggests Wall Street prices may continue to rise.

Positioning is less net-short than yesterday but more net-short from last week. The combination of current sentiment and recent changes gives us a further mixed Wall Street trading bias. 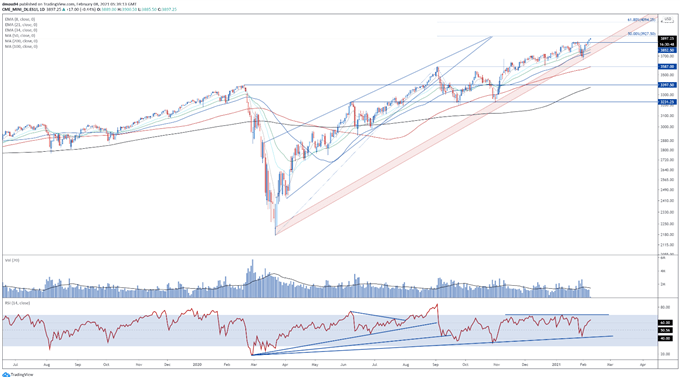 The S&P 500 also looks poised to continue climbing higher, as prices easily slice through resistance at the January high (3862).

Once again, with the RSI climbing into bullish territory above 60, and price tracking firmly above all 6 moving averages, the path of least resistance seems higher.

A daily close above the 50% Fibonacci (3927) would likely intensify buying pressure in the near term and pave the way for the index to probe the 4000 mark.

Alternatively, failing to clear 3900 could trigger a short-term pullback to former resistance-turned support at 3850. 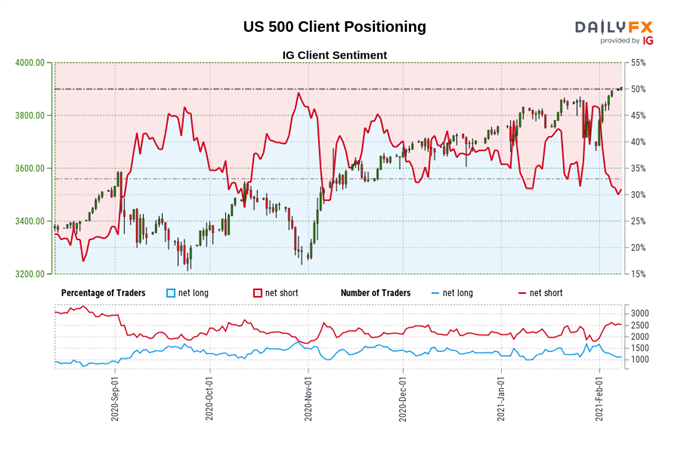 We typically take a contrarian view to crowd sentiment, and the fact traders are net-short suggests US 500 prices may continue to rise.

Positioning is less net-short than yesterday but more net-short from last week. The combination of current sentiment and recent changes gives us a further mixed US 500 trading bias.