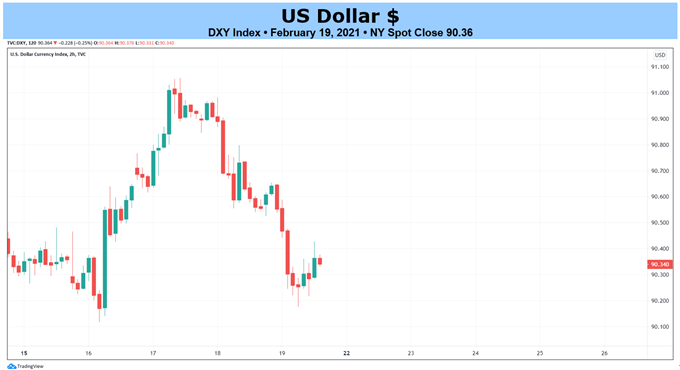 Fundamental Forecast for the US Dollar: Neutral

The US Dollar (via the DXY Index) turned lower at the end of the week, kneecapping the nascent rally through the pandemic downtrend (March and November 2020 highs). US economic data has been outperforming, leading to a rise in both US nominal yields (Treasuries) and inflation expectations (breakevens), but with latter rising faster than the former, US real yields have come back down. Notably, EUR/USD finished the week above 1.2100 again, while GBP/USD closed right at 1.4000 for the first time since mid-April 2018.

US Economic Calendar Loaded with Risk

The last week of February brings a bonafide cornucopia of event risk for the US Dollar. The main event of the week will be Fed Chair Jerome Powell heading to Capitol Hill for two days of testimony to deliver the semi-annual Monetary Policy Report (which we discuss in greater detail below).

But the economic calendar itself is supersaturated with event risk otherwise, likely giving traders plenty of opportunities to catch bouts of volatility in USD-pairs over the coming days:

Based on the data received thus far about 1Q’21, the Atlanta Fed GDPNow forecast is looking for growth at +9.5% annualized. The estimate has risen sharply in recent weeks, from +4.5% in early-February, bolstered by a much better than expected January US retail sales report (thanks to those $600 stimulus checks, as well as greater confidence among consumers as vaccination rates accelerate). The next 1Q’21 Atlanta Fed GDPNow forecast will be released on Thursday, February 25.

Federal Reserve policymakers have been nonchalant about the accelerating US economy, with FOMC member and St. Louis Fed President James Bullard saying that we’re not necessarily in a “bubble,” but rather dealing with “normal investing” in recent days. Fed Chair Jerome Powell himself for week has been tamping down taper tantrum talk, but all of views on the US economy will come into focus this week when he heads to Washington, D.C. for the semi-annual Humphrey-Hawkins testimony. 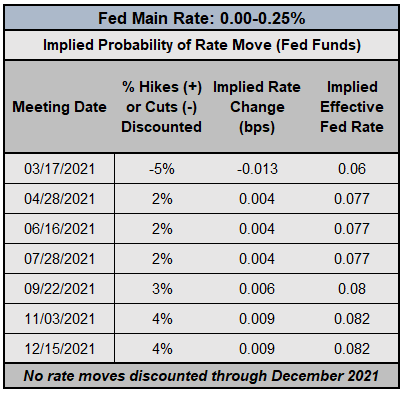 In delivering the semi-annual Monetary Policy Report to Congress, the Fed Chair is very likely to use his time on Capitol Hill to soothe concerns that the rise in US Treasury yields is foreshadowing harrowing levels of inflation. Fed Chair Powell may very well acknowledge that inflation could rise, but the Fed seems poised to ‘look through’ any uptick in the near-term.

As long as Fed Chair Powell is at the helm, the FOMC will stay the course, with the intent of keeping interest rates low through 2023. Fed funds futures are pricing in a 96% chance of no change in Fed rates in 2021. For context, one month ago, when the US Treasury 10-year yield was some 20-bps lower, Fed funds were pricing in a 93% chance of no change in rates. Even as the US Treasury yield curve has steepened over the past month, market participants don’t foresee any acceleration in the Fed’s efforts to normalize policy.

Get Your Free USD Forecast

US Dollar Net-Shorts Sticking Around (Chart 2) 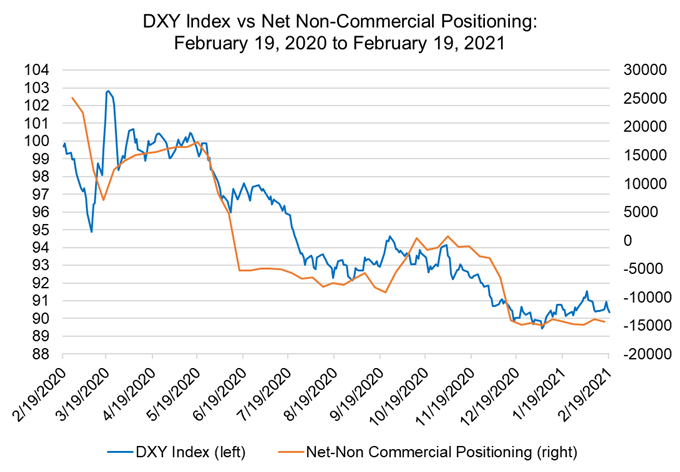