What are the top trading opportunities in 2021?

The New Zealand Dollar is aiming higher heading into the RBNZ monetary policy announcement due on Wednesday at 1:00 GMT. In fact, NZD/USD just closed at its highest since April 2018, resuming what has been the dominant uptrend since March 2020. Now, all eyes are on the Reserve Bank of New Zealand, particularly given rather upbeat economic data from the island country.

Following an estimated 2.7% y/y contraction in real GDP last year, that is, adjusted for inflation, growth is anticipated to increase 4.6% in 2021 – according to Bloomberg. This is likely due to New Zealand’s impressive Covid-19 response, combined with local stimulus and a rebound in global growth bets. As a result, local 2-year inflation expectations recently climbed to 1.89% in the first quarter, the most since before the pandemic.

Nominal longer-term government bond yields also reflect this reflationary scenario, with the 10-year rate sitting above 1.64%. Generally speaking, longer-term yields have been on the rise. In the US, the 10-year Treasury yield is around 1.36% at the time of writing. Those returns on the front-end of the maturity spectrum across the board remain depressed by aggressive quantitative easing measures from central banks.

There are some growing concerns about the strength of the Kiwi Dollar and how it could hurt exports. But, it should be noted that the growth-linked currency can be quite sensitive to the broader picture of market sentiment. On the chart below, I have overlaid a majors-based NZD index compared to US ISM manufacturing. The relationship can at times be close, with many looking to the US for global growth trends.

As the world continues to recover from the pandemic, the NZD could yet remain in a favorable position down the road. But, a potentially greater risk in the short-run is if the RBNZ maintains a dovish policy stance, while also upgrading its economic outlook. After all, if a central bank plans to maintain settings unchanged despite upbeat data, then there could be some room for disappointment to those betting on a less-dovish outcome.

How can you overcome common pitfalls in FX trading? 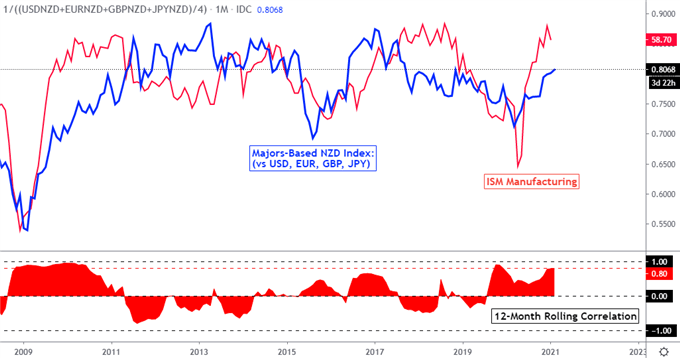 So if there is room for downside, what might that look like for NZD/USD around the RBNZ? It should be noted that the pair broke above a Symmetrical Triangle, subsequently taking out the January 6th high. That has opened the door to resuming the dominant uptrend, placing the focus on highs from 2018 and beyond. But, negative RSI divergence does show that upside momentum is fading. This can at times precede a turn lower.

In the event of such an outcome, keep a close eye on the 50-day Simple Moving Average. It could reinstate the focus to the upside. Otherwise, a drop through it would expose the January 18th low at 0.7097. Under this price point sits the 0.7 figure which acted as support on a couple of occasions in December. Getting under this point may greatly increase the prospects for a deeper pullback.