The rotation continues in the US equity markets as Nasdaq indices tumbled by -2.7% (the Nasdaq 100 was down nearly 3%). The NASDAQ index at its worst 2 day decline in over 6 months.  The Dow was the best performer helped by financials, Boeing and Chevron (oil was higher today), but still closed at session lows in a late day sell off. The S&P also closed at session lows.

Below are the % changes and ranges for the major North American and European markets.

The forex market saw the GBP and the USD posting the biggest gains on the day. The NZD and CHF were the weakest. 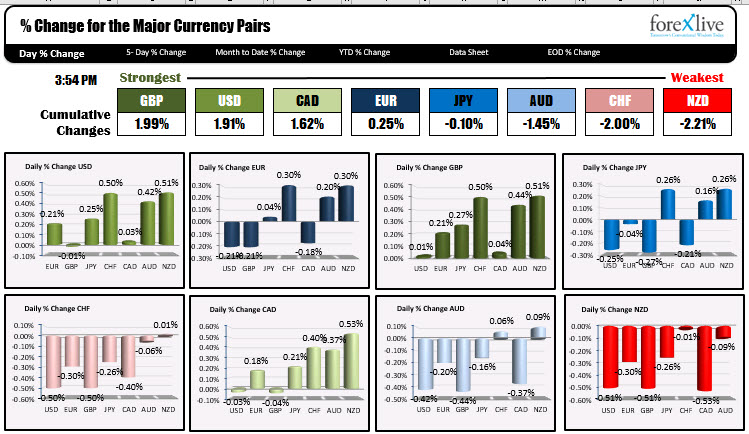 The USDCHF is closing near the session highs as it pushed away from its 200 day MA. Yesterday, the USDCHF tested that key MA at the day lows, and pushed higher for most of the day today.  The pair is looking to test the 0.9200 level for the first time since November 2, 2020.

For the NZDUSD and the AUDUSD, each open the New York session near lows, saw modest retracements of the Asian and early European declines, before moving lower into the close. The pairs remain above the days lows but closer to those levels as investors exited risk currencies in the favor of the US dollar and GBP.

Fundamentally today, the ADP employment jobs adds came in less than expected at 117K vs 225K estimate. The important Bureau of Labor Statistics report will be released on Friday with expectations for a 200K increase.

The service sector ISM index came in much weaker than expected 55.3 vs. 58.7 estimate. Prices paid rose sharply to 71.8 vs 64.2. New orders fell sharply to 51.9 vs 61.8 prior. The employment index also fell to 52.7 vs 55.2 prior. That is pretty much the worst case scenario for equities and bonds and certainly helped to define their day’s.  They also kept the dollar more bid overall.

From the Fed today, Fed’s Evans talked more optimistically about inflation then what the bond market implied. He said:

Nevertheless, when the bond market and stock markets have an idea and positions are offsides, sometimes words don’t matter.