Euro price to weaken if ECB steps up bond purchases

Member after member of the European Central Bank’s Governing Council was warning last week that the ECB would have to respond to the recent surge in sovereign bond yields around the world as traders reacted to fears of higher inflation when the global economy recovers from the slump caused by the Covid-19 pandemic.

There is no chance that a decision to cut Eurozone interest rates, or even to ease monetary policy substantially, will be made at this Thursday’s Council meeting but the jump in the yield on the Eurozone’s benchmark 10-year German Bund has clearly rattled the ECB and that means a small easing of policy, probably by stepping up its bond purchases, cannot be ruled out. 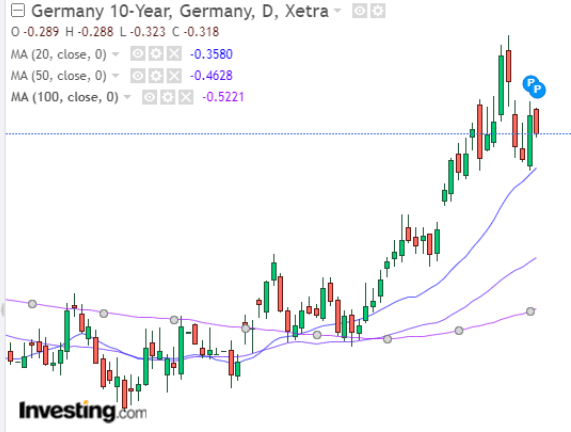 To make matters worse, the German yield curve has steepened, and that too has disturbed the ECB’s policymakers.

Among those Council members, Italy’s Fabio Panetta said last week that the steepening in the yield curve is unwelcome and must be resisted. “We should not hesitate to increase the volume of purchases and to spend the entire PEPP envelope or more if needed,” he said, referring to the ECB’s Pandemic Emergency Purchase Program. France’s François Villeroy de Galhau also said the recent rise in yields is unwarranted and that the ECB must react against it. “The first tool is actively using the flexibility of our PEPP purchases,” he said.

Even Germany’s Jens Weidmann, seen as an ECB hawk, said the PEPP comes with flexibility “and we can use this flexibility to react to such a situation.”

Clearly a decision to increase debt purchases would be negative for EUR/USD and a hint could come as early as Monday when data are released on bond buying. Last week, the figures actually showed a slowing in net bond purchases, although they were distorted by redemptions.

Conversely, of course, the Euro would likely strengthen if the talk is not followed by action and nothing concrete is announced by ECB President Christine Lagarde at her news conference following the central bank meeting. 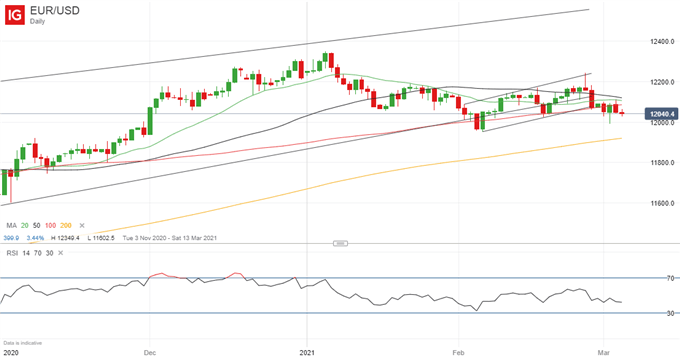 Source: Finance Prop (You can click on it for a larger image)

Turning to the economic data, the figures due this coming week are second tier. Both fourth-quarter Eurozone GDP Tuesday and February German inflation Friday are revised numbers, while January industrial production data for Germany Monday and the Eurozone Thursday are largely historic.