The rotation seen in markets benefited financial stocks – which generally perform well in a rising rate environment – with Goldman Sachs and Visa rising north of 2%. Meanwhile, Walt Disney shares put in an impressive 6.26% gain. This followed a change to California’s Covid guidelines allowing Disneyland Park to open to the public at the beginning of next month.

On the currency front, the US Dollar rose alongside government bond yields as the US economic outlook continued to strengthen. The House of Representatives will reportedly hold a final vote on the Senate-approved $1.9 trillion stimulus package. Lawmakers will reportedly meet on Wednesday to vote on the measure. Elsewhere, Bitcoin climbed above the 52,000 level as the cryptocurrency rose more than 5%. 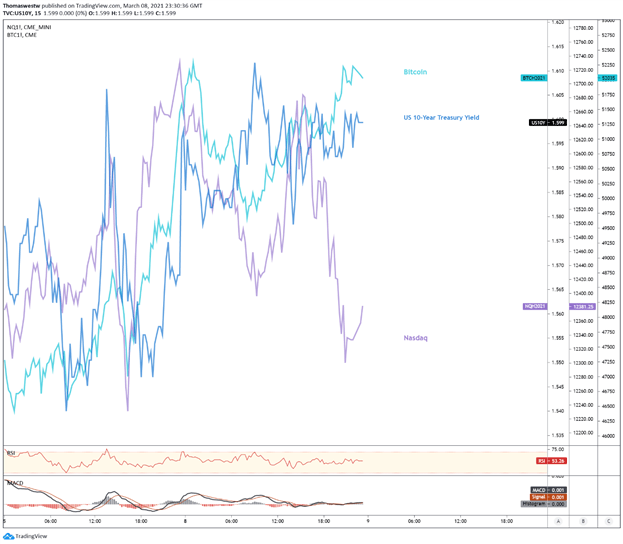 The risk aversion was hardly contained to equity markets, however, with the risk-sensitive New Zealand Dollar losing ground against the Greenback for a fourth consecutive session. NZD/USD is now trading near its lower point since January after capital flows shifted into the safe-haven US Dollar. The Australian Dollar underperformed the USD as well. Today’s economic docket is light but traders will go over Japan’s final GDP read for Q4, due out this morning.

The New Zealand Dollar lost ground against the Greenback after piercing below trendline support late last week. The cross is seeing a small bounce this morning near the 78.6% Fibonacci retracement level from the December – February move. Breaking below that Fib level may open the door for prices to fall to its 100-day Simple Moving Average. The bullish alternative would see prices climb above the 61.8% Fib and then take aim at reclaiming the aforementioned trendline. 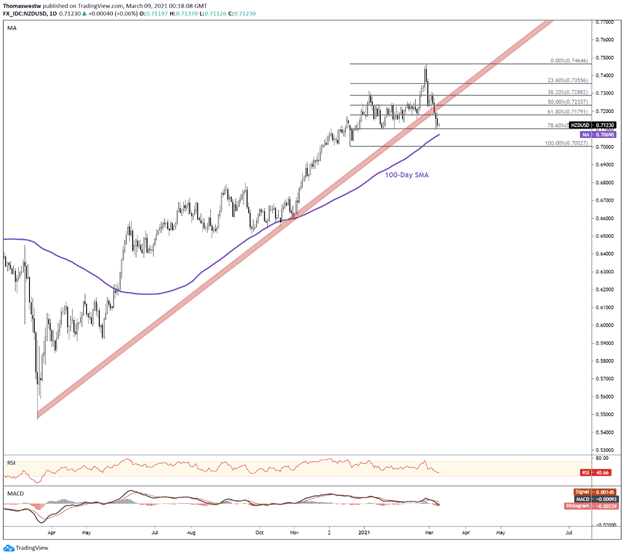